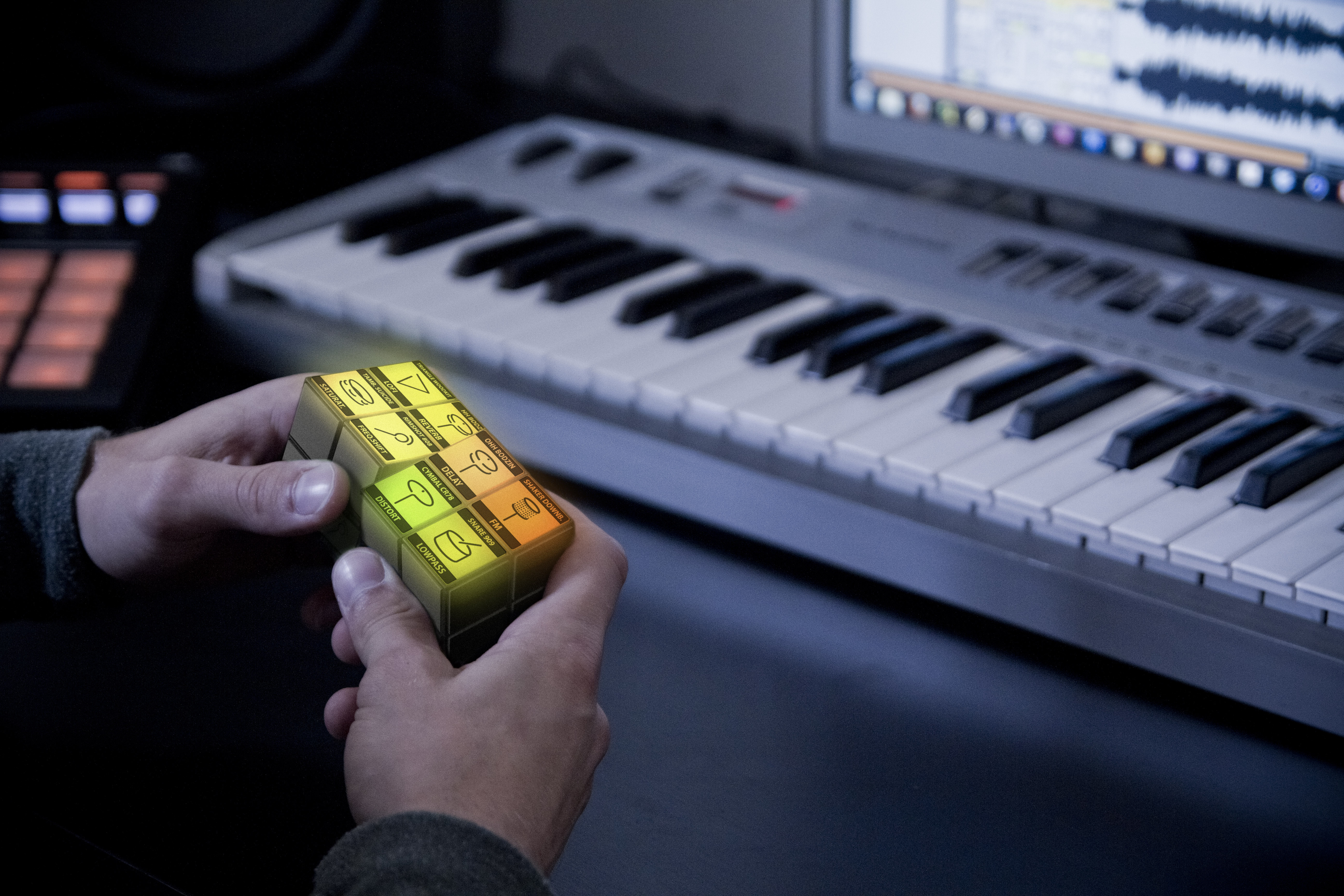 The MusixCube is a hand-held controlling device for a given piece of digital music production software, such as Ableton Live, Logic, etc. This project combines several hardware items, like drum computers and other MIDI controllers.One focus of this was the idea of taking the music producers away from the computer and allowing them to take back the music into their own hands. The interaction is based on the Rubik‘s Tower. One or more persons are able to edit and create a certain piece of music alongside each other. The MusixCube is made of fourty touch- and pressure-sensitive OLED-screens. By tilting, turning the single segments and other moves, the user can affect parameters, sequence samples and trigger effects. Additionally, you can also create loops and play sounds which previously have been assigned to the different pads and fx-slots. After arranging some songs, the user can work with at least two cubes for a live performance and to mix their own music. 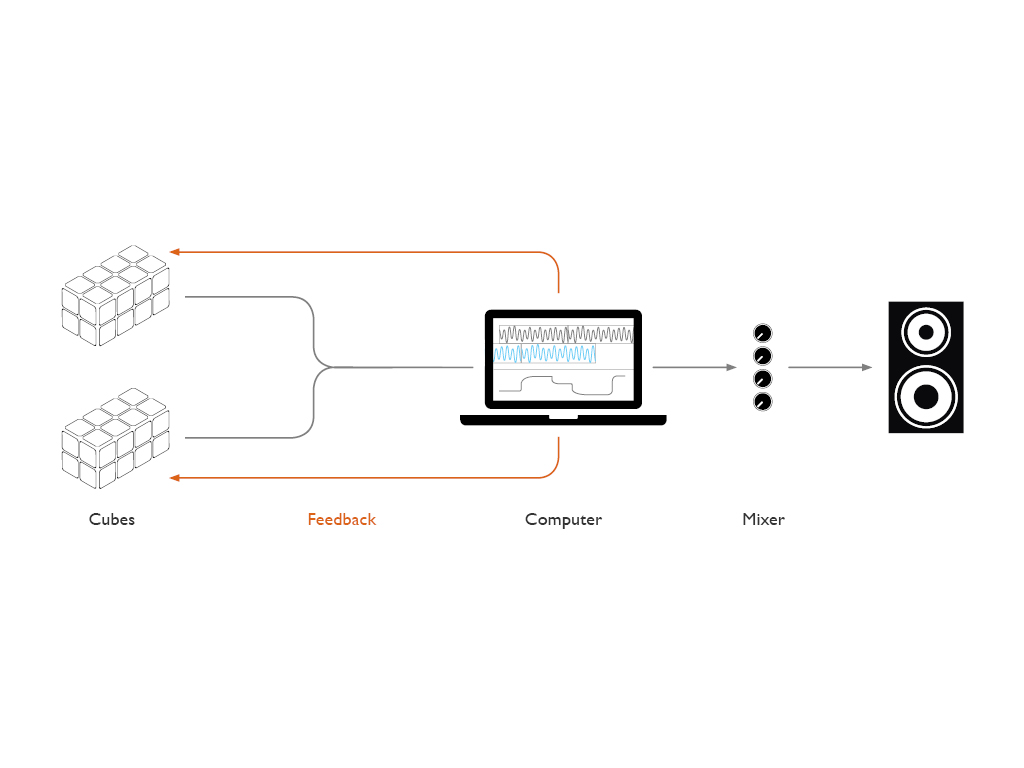 One or more MusixCubes communicate with their software via Bluetooth. Play, record and BPM of both are synchronized. Once the record starts, there would be a real time record of the groups, samples and automations in single tracks. Afterwards, the user is also then able to edit everything with the software.

There are five layers to work with: the group layer, the sampler layer, the options layer, the levels layer and the FX layer. Each layer is formally seperated to the others and has its own scope of duties. If two cubes are moved towards each other, their active tracks will be mixed with each other in a DJ-style. This higher layer is called the mixing layer. Besides, there is also the possibility of triggering effects spontaneously by turning the single segments in the group- and the sampler layer. There is always only the top surface active. The single pads are highlighted in either different colors (group layer), the same colouring (sampler layer), or in white (for controls such as record, delete, etc.). 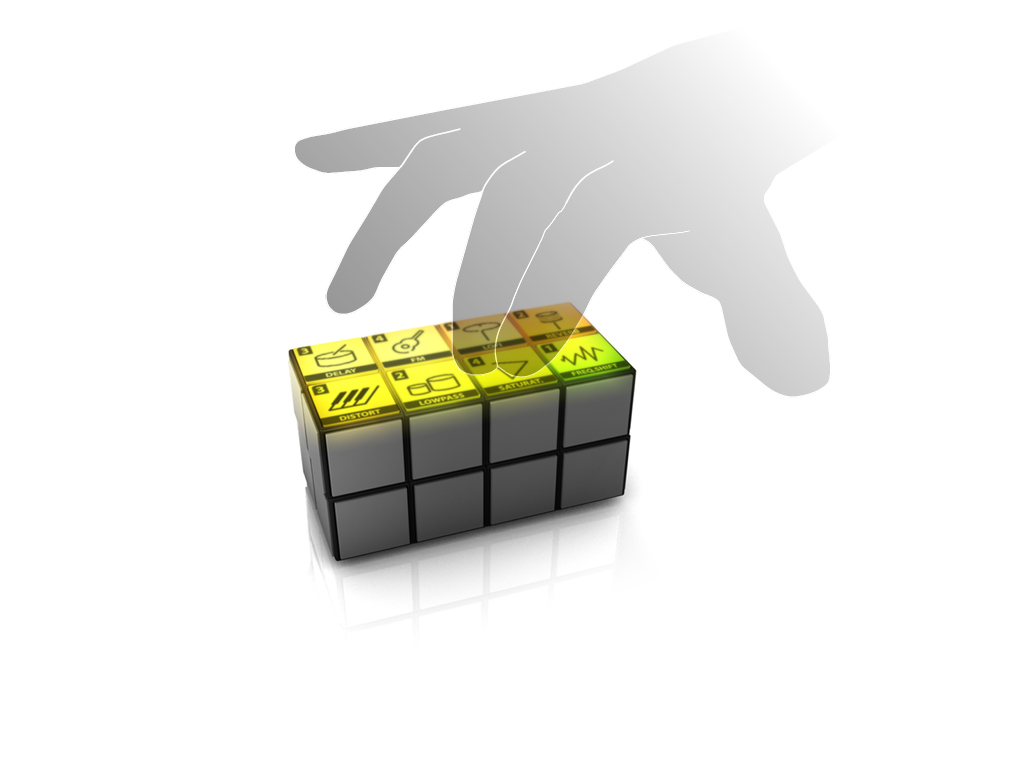 The given information shown on the pads/displays are the assigned effects, an icon of the first instrument of the group and the active pattern. 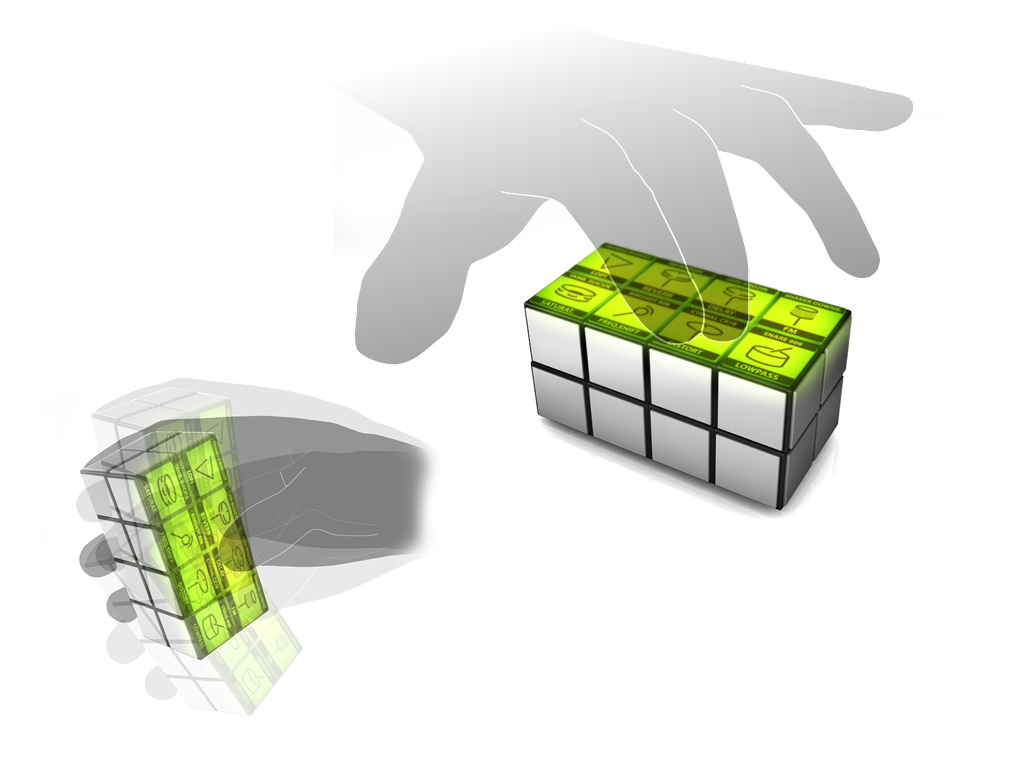 By tilting the whole cube after activating a certain group, the user reaches the sampler layer of this particular group. 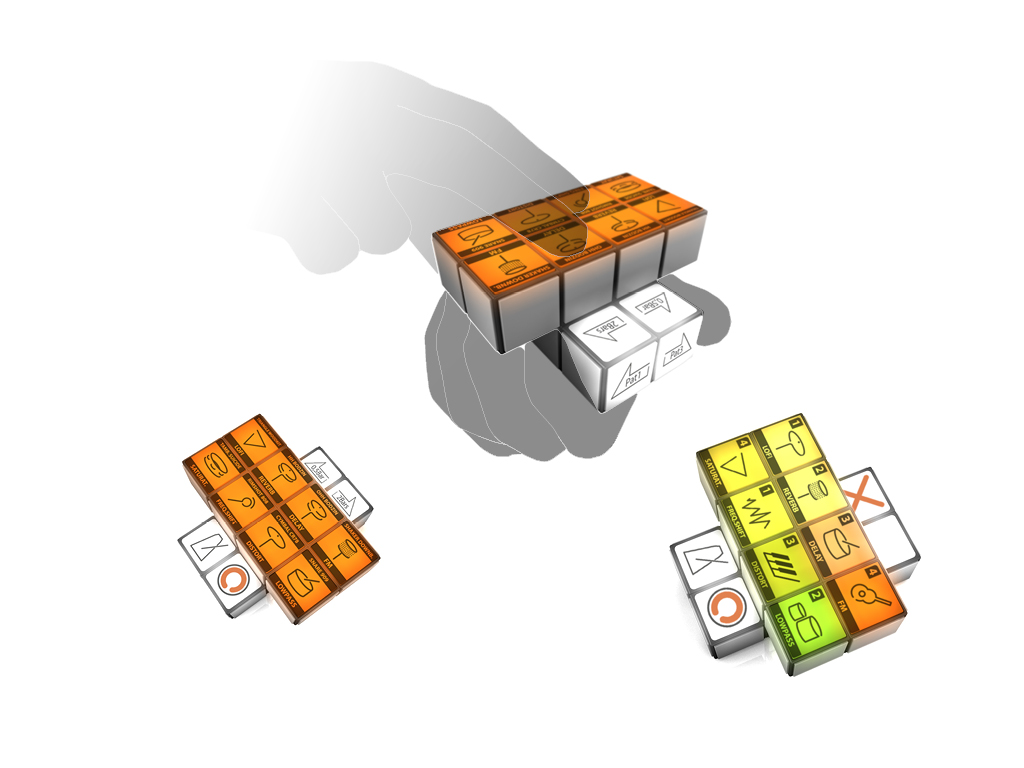 The options and settings for the sampler- and the group layer can be reached by turning the upper half of the MusixCube by 90°. For editing a sample or the patterns there are several little touch sensitive screens which appear, once the rotation is complete. 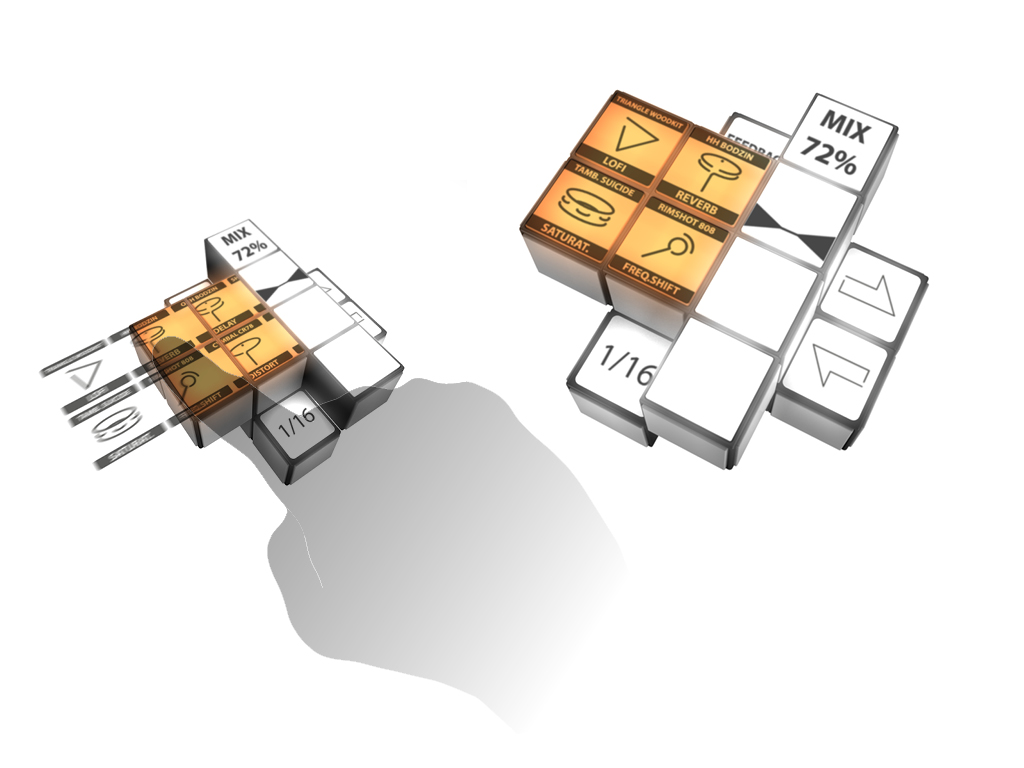 After two different turns of the cube’s segments the user is able to edit and change effects, which have been assigned to the different groups and samples. Depending on which layer (group- or sampler layer) was chosen before, these specific groups or samples can be edited. 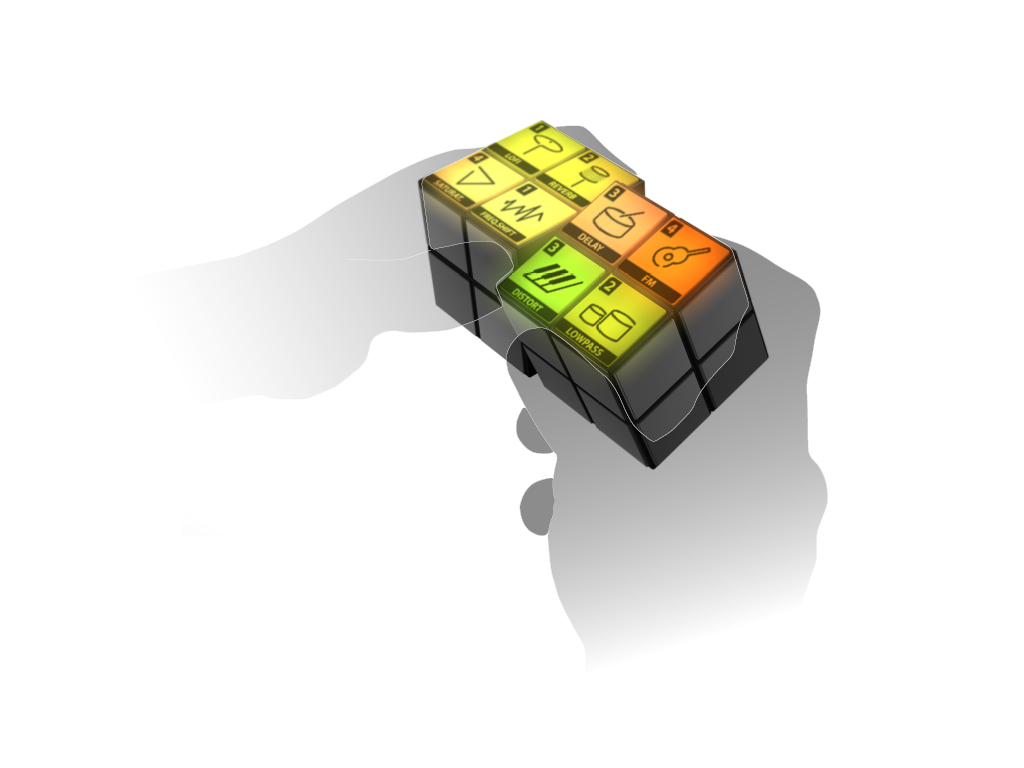 If you are working in the group- or the sampler layer, there is the possibility to trigger effects spontaneously on a group/sample for variations in your compositions. 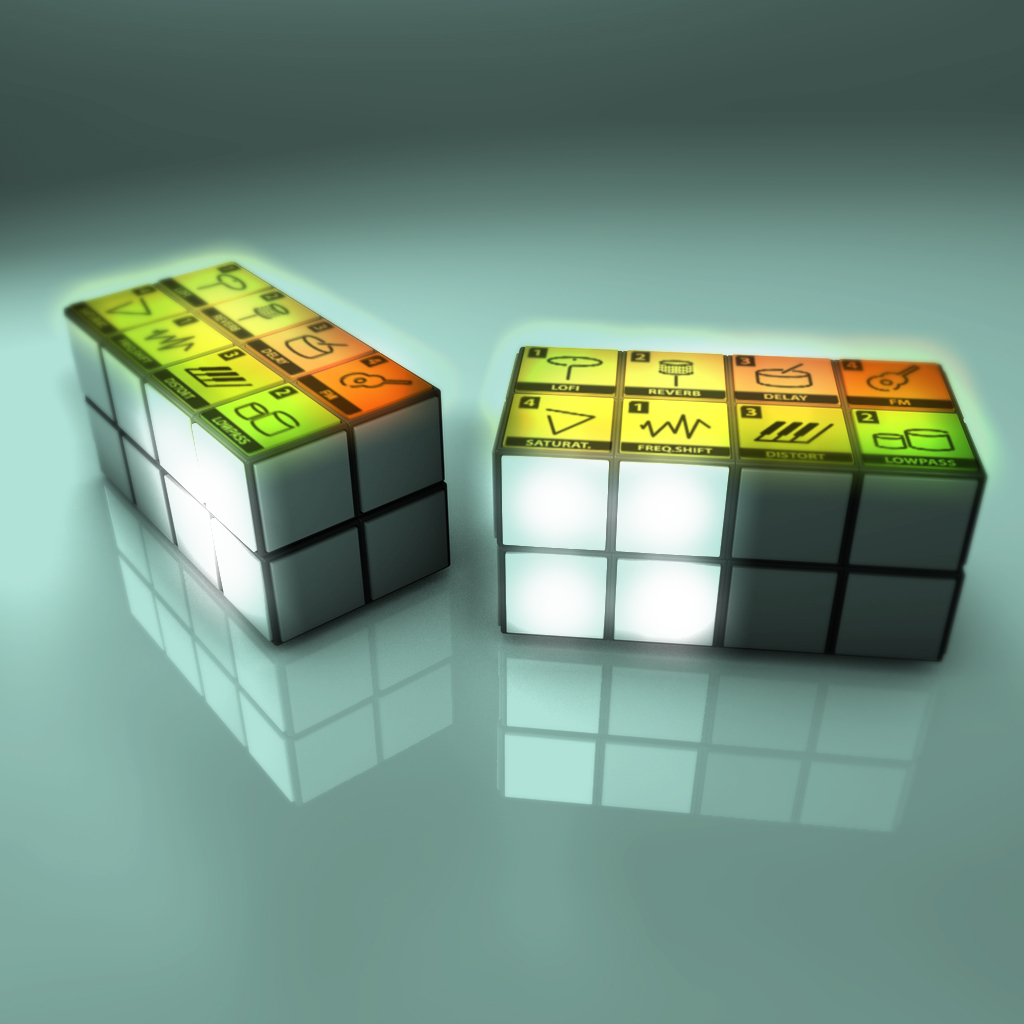 There is also the possibility to mix tracks from two or more different songs, just by moving one cube towards another- an interesting feature for live performances.

•use all layers
•move cubes towards each other 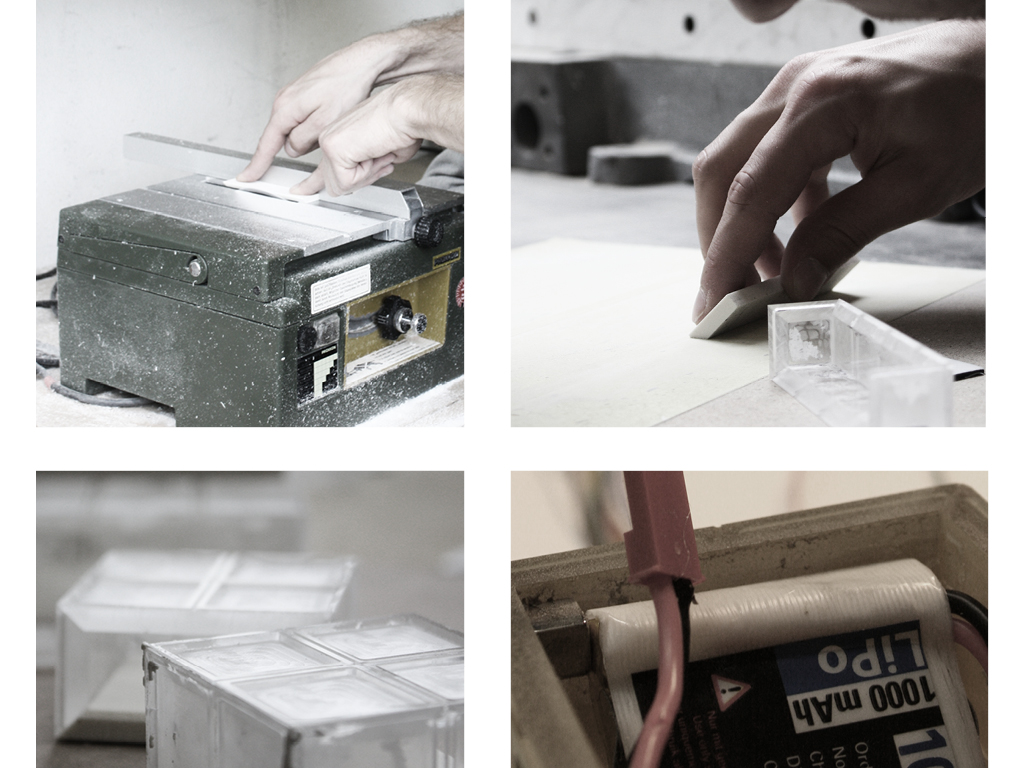 In the course of the project, two prototypes have been developed. With these prototypes, users were able to mix two songs, trigger effects and to tap for triggering samples. An Arduino board with a WIFI emitter and some other technichal equipment were connected to Ableton Live to control a sampler and some modulators.